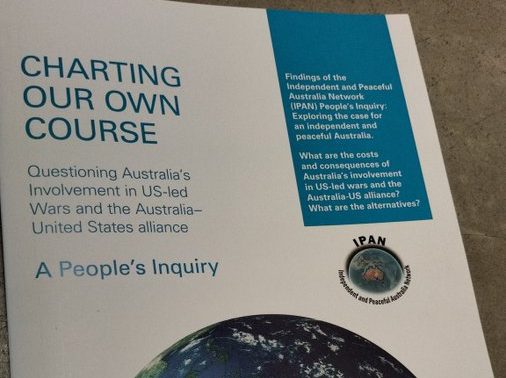 A new report produced by the national peace group IPAN has been tabled in parliament, following a two year “people’s inquiry”, investigating alternatives to our current defence and foreign policies.

Entitled “Charting our own course” the report highlights 283 submissions from organisations and individuals, many of whom are deeply concerned about the growing spectre of war in our region.

“Never before has the need been so urgent to ‘stand on our own two feet’ and ‘chart our own course’ in foreign policy independent of the United States”, said IPANs Dr Vince Scappatura.

Dr Scappatura is also very critical of the AUKUS military pact which was initiated by the Morrison government and enjoys support from the Albanese government: “It seems abundantly clear that the AUKUS arrangement is not for the defence of Australia but for preparations for launching aggression against China in support of maintaining United States’ dominance in the Asia-Pacific region”,

IPAN has also expressed alarm about the increasing number of U.S. marines stationed in Darwin and the decision to allow up to six U.S. B-52 long range bombers capable of carrying a nuclear payload, to be stationed in the NT.

AWPR President Dr Alison Broinowski contributed to the IPAN report as the editor of the chapter on foreign policy.

The Charting our own course report was tabled in Parliament by Senator David Shoebridge on November 24.

The full IPAN report can be found here

Heading for another Cold War?

White and might is right: the secrets which push us into other people’s wars