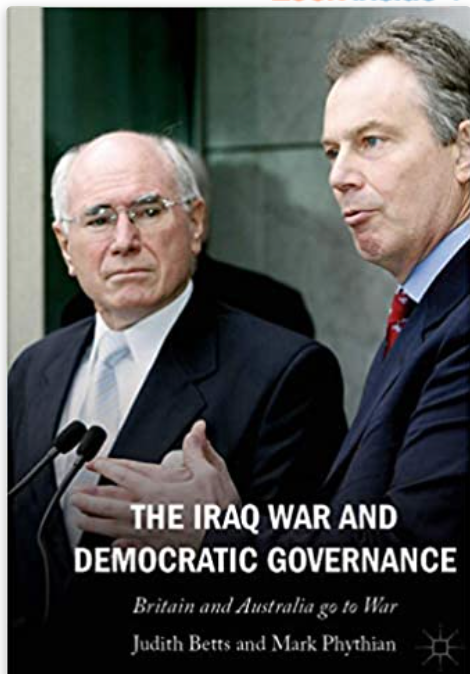 Next month marks eighteen years since the US-led offensive descended on the Iraqi capital of Baghdad and Australia’s entry into the war continues to serve as a reminder of how centralised our war powers are. The then Prime Minister John Howard and a select group of ministers took that fateful decision without a parliamentary vote. The war power as exercised by the prime minister in the National Security Committee of Cabinet imposes no accountability on governments or on individual MPs or Senators’.

In their recent book, “The Iraq War and Democratic Governance: Britain and Australia go to War”, Judith Betts and Mark Phythian analyse and contrast the lead up to the conflict and subsequent post-war inquiries in Australia and the UK. The book examines the role of the media, political parties and each country’s reliance on their respective relationships with the United States.

The findings from the in-depth research on how Australian troops were sent to fight in Iraq are relevant in the ongoing push for war powers reform, amid the war crimes allegations in Afghanistan, the recent heightening of tensions in the Middle East and an uncertain geopolitical future in the Asia-Pacific region.

I had the opportunity to ask Judith about her research, its application in the current political environment and the Australian Parliament’s prolonged unwillingness to decentralise war powers.

TM: What were the main motivations behind this book and your preceding PhD thesis on Australia’s role in the Iraq War?

JB: When I was considering doing a PhD I was advised to consider a topic about which I was passionate: one that would keep me interested for the long grind.  The Iraq war fitted the bill and my thesis examined the role of Australia’s media in holding the Government to account over our involvement.

I think my motivation was to understand how John Howard got away relatively unscathed with taking Australia to its first war of aggression, especially given the failure to find WMD.

The book draws on my thesis, but has a broader focus.  It is co-written with Mark Phythian, a British academic, and looks at governance issues in Australia and the UK in relation to both countries’ involvement in the war.  The book contrasts the ways in which Blair and Howard managed the US Alliance and their ‘special’ relationships with Bush; the degree to which each ‘sold’ the war; their distinctive leadership styles; and their relationships with their parties, Cabinets, Parliaments and media.  Finally, the book examines the post-war inquiries, the degree to which they held Blair and Howard to account, and the political price each leader paid.

TM: What have been your main discoveries since publishing the book last year?

JB: Researching the book opened my eyes to differences in the ways the Australian and UK media covered the war.  Blair in the UK faced a much more exacting media than Howard in Australia, where there was only one major newspaper, the Sydney Morning Herald, that opposed the war. Both Howard and Blair were masters in managing the media, but in the end Blair paid the greater political price.

In the UK, there were five inquiries into their involvement in the war.  The media and the public did not give up until they had the answers they wanted and were finally delivered in the Chilcot Inquiry report in 2016.

In Australia, there were two inquiries and the first, the Jull Committee (the Joint Parliamentary Committee on ASIO, ASIS and DSD) reached conclusions similar to those reached by the Chilcot Inquiry in the UK, 13 years later: namely that the government’s argument for war overstated or exaggerated the threat identified in intelligence reports.

Had it not been for Howard’s masterful management of the media (select sections of the report were leaked to the media two weeks prior to release of the official report), the findings of the Jull Committee might have been deeply damaging.  For two weeks, media coverage was dominated by a narrative that the report had somehow exonerated the government.  When the report was released, it did no such thing, but few in the media had the time or inclination to take a fresh look at the document.

But it was not just a lack of curiosity on the part of the media that got Howard off the hook. Senior members of the Labor Party decided that they were never going to win in a battle with Howard over national security, in large part because Howard would turn any debate into a battle over the US Alliance, and Labor would emerge looking anti-American. So there was little political will to hold Howard to account.

TM: In your research, what accounted for the key differences between the evolution in war powers reform in the UK and Australia?

JB: Blair found himself in different political circumstances to Howard.  In the UK, the Labour Party was split on involvement in the Iraq conflict and Blair needed the legitimacy that a debate and decision in Parliament could afford. He had resignations from his cabinet on the issue.  As a result, use of the Royal Prerogative to deploy armed forces overseas came to be replaced by the convention that the House of Commons be given the opportunity to debate any decision to go to war, the exception being in case of an emergency. The UK Parliament, for example, rejected Prime Minister David Cameron’s bid to send troops to Syria.

Australia’s Constitution vests the Queen’s Executive power to declare war in the Governor-General on the advice of the Federal Executive Council.  This means, effectively, that the decision resides with the Prime Minister and Cabinet.  Successive prime ministers on both sides of politics have resisted any change to that arrangement.

TM: In describing Prime Minister Howard’s political damage from the post-invasion inquiries, you argue this was minimised due to a “skilful agenda management and defensive spin”, supported partially by a “Murdoch-dominated media landscape”. If a similar situation unfolded today, is there a risk of history repeating itself?

I would hope that a current or future prime minister would have learned from the Iraq disaster, and would think very carefully before following our US allies into another war.  But there is a risk of history repeating itself.

The hollowing out of the media and the lack of transparency in government decision-making has made it harder for investigative journalists to shine a light on government decisions.  And the Australian media remain dominated by News Corp and Murdoch’s agenda.

As has always been the case, politics is a game of agenda management and spin, with the strongest performer, rather than the best ideas, winning out.  And who knows if, after years of politicization, our public service chiefs have the courage to provide frank and fearless advice.

There are no new or additional means of holding the government to account.  Howard showed how defensive spin could be used to change the narrative and effectively manipulate the debate when a parliamentary inquiry came up with findings that were potentially damaging.  Not all, but some in the media allowed themselves to be manipulated.

So, yes, there is a danger of history repeating itself.

TM: Could you envision a scenario where legislative reform is not required for a change in Australia’s long standing convention of not requiring parliamentary approval?

JB: I am not a Constitutional expert, but I don’t believe that there is any legal impediment to an Australian Prime Minister putting a decision to go to war to the Parliament.  It would create a precedent and could become a convention in the same way it has in the UK, when Blair put the Iraq decision to the Parliament.  Were a convention to be established, it might prove difficult, politically, to ignore in any future conflict.  But this route would involve an Australian Prime Minister voluntarily giving up power and neither side of politics has expressed interest in going down this path.

The Australian Democrats and the Greens have sought to reform war powers through legislative change.  They have proposed changes to the Defence Act to require Parliamentary approval before Australian troops are deployed overseas.  Every attempt has been stymied by the lack of political will on the part of the major parties.

TM: The book concludes by raising the possibility that the fallout from the failures in Iraq may “be seen as significant but not transformative”. In your view, what barriers are present in today’s political climate for substantial reform?

JB: I cannot see the political will on the part of the major parties for war powers reform.  The Greens have long agitated for reform, as has Andrew Wilkie, but neither Labor nor the Liberals have shown any inclination.  The main political parties clearly do not see it as an issue that would influence anyone’s vote. Despite strong public support for a parliamentary say in the deployment of troops, mobilising the public remains a challenge, especially while there is no specific conflict on the horizon.  Should the possibility of future conflict arise, for example with China over Taiwan, then that would be the time to pull out all stops and mount a public campaign.

In the meantime, it is worth identifying and working with potential strategic partners and planning the messaging and campaign that would swing into action.  It is also worth thinking outside the square when it comes to potential advocates.  For example, how do members of the military or their families feel about the issue? Are there groups, like GetUp! or Avaaz, that might be potential allies in a campaign?

TM: How do these factors differ from the hurdles faced by the Australian Democrats or the Greens in their original/earlier attempts at reform?

JB: While the Iraq war is a strong example of the need for robust decision-making when it comes to war, I think the hurdles to reform are the same as those faced by the Democrats and the Greens.  It boils down to a lack of political will.  Only a surge in public support for a parliamentary role in a war decision could change their minds.

TM: Do you believe these will be influenced at all by the recent Roy Morgan opinion poll showing overwhelming public support for parliament voting on military deployments?

JB: It always helps to remind politicians when there is strong public support for a particular policy initiative.  But strong public support does not always translate into policy change.  With issues like marriage equality and climate change, for example, we see that public opinion can be way ahead of our politicians.  The parties need to be convinced that if they take a stand on an issue, it will translate into votes at the ballot box. We live in hope that they will eventually catch up.

The Roy Morgan opinion poll cited in the interview indicated that an overwhelming majority of Australians (83%) favour policy change that would require parliamentary approval of military involvement overseas. The increase in support since 2014 represents a unified position from voters of the major political parties and represents a clear discrepancy with politicians’ views.

This crucial decision-making power controlled by the Prime Minister is likely to have an increasing consequence on the domestic political landscape and how Australians view potential military interventions moving forward. A continuing reliance on our military relationship with the US may see this power placed under substantial pressure.  Questions remain over how the incoming Biden administration handles matters such as the future of the Iran nuclear agreement, China’s growing power in the world and the governance of Taiwan.

Late last year, a private Member’s bill introduced by the Greens Senator Jordon Steele-John placed the issue of parliamentary war powers reform back on the agenda in Canberra. It won’t be long until we see if history repeats itself yet again or if the will of the public is respected and proper debate ensues.

The Iraq War and Democratic Governance: Britain and Australia go to War is published by Palgrave: https://www.palgrave.com/gp/book/9783030503185