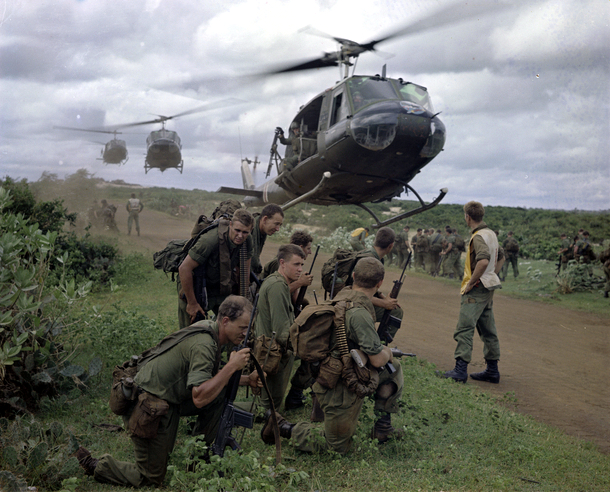 Australian troops waiting for US Army helicopters to return to base in Nui Dat, South Vietnam, August 1967. Image: Michael Coleridge via Wikimedia Commons

Metaphorically, if society resembles a rug, then certainly ‘we’ are not supposed to peek under it, to check out the weave, to gain some specific insight or understanding into the makeup of the official picture, or pattern on top.

Historically, this ‘official picture’ con has been going on for some time; certainly by WW1 it was peaking with the citizens of many nations indoctrinated/incited into killing one another like never before; by a few empowered nutters and their tawdry cohorts. White feathers were an instrument of hell.

Given the present-day situation regarding warfare and ‘our’ involvement, just what would we perceive beneath the carpet? We would of course see the obvious strands like the bright red ‘illegal war’ strand, and its brownish offshoot ‘undeclared,’ along with a myriad of other earth-coloured threads, bearing descriptors like ‘hush-hush,’ ‘operational matters,’ ‘ongoing,’ etc.

Being diligent and following all the strands, the seemingly indecipherable networks of semi-abstract movements, the complicated knotting processes whereby unmatching colours mysteriously ‘work’ on the surface, you will finally discover that the con is entirely reliant on your craven gullibility; it’s all a matter of never-ending brainwashing.

I remember as a soldier stationed at Nui Dat, South Vietnam, 1969, I came across an Australian conscript who was quite beside himself, unsettled by the unholy screaming every night emitting from the interrogation unit, all too close to his tent. The look on his face, the agony expressed, was enough to tell me what he was going through. I must admit I had, over a period, witnessed many truckloads of prisoners, blindfolded, hands tied behind backs, heading to the barb-wired, sack-enshrouded unit, directly over the road from the chopper pad. Those detained were always in civilan attire, heads bowed, and only ever headed one way, seated in the back of a truck that is.

Gullibility usually rubs off when exposed to the rawness of war. Treaties like the Geneva Conventions become abstract concepts, pliable, multiple skeins finely woven, but in all truth the niceties go out the window, and dog eats dog.

Certainly we are being made monkeys of. The Vietnam war was predicated on the Gulf of Tonkin incident, total nonsense, and the Iraq war (WMDs) was again total nonsense, despite it now being ’embarrassing’ for those responsible in declaring it, it still goes on, chameleon-like, evolving… a bonanza for the arms industry, the big end of town.

With the Middle East war there is no end in sight and the ongoing implications re terror are mind-numbing, not to metion the refugee crisis. If only our initial military involvement in the Middle East had been properly debated. Fools rush in.

As a proponent for the reform of the war powers in Australia I endeavour to stand clear of my unwitting simian brothers and sisters. I’ve rumbled the tangled web and dare, with others, to call for the democratic process to prevail; to remove the Prime Minister’s singular ability to declare war, and to put it in the hands of many, the whole of parliament, ostensibly us, most certainly not in the hands of corrupt industrialists, dubious legal firms, multi-nationals, and those they seek to influence.

Contributions from AWPR members are appreciated and welcomed. While the views expressed by members do not necessarily reflect the view of the organisation as a whole, we seek to publish a diverse range of opinion so as to identify common ground. Send contributions to: info@warpowersreform.org.au

Donald Trump and Kim Jong Un: There’s More to Foreign Policy Than The Art of the Deal

The importance of monitoring civilian losses