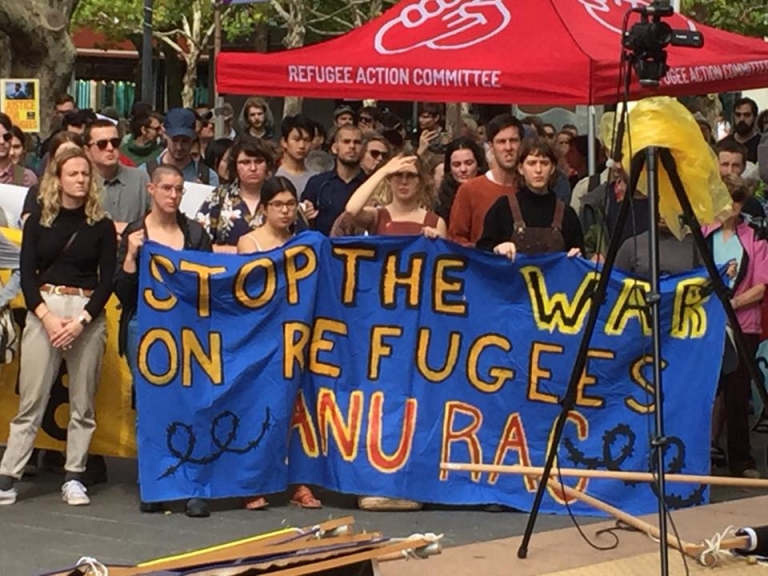 My remarks this morning are directed not so much to how we treat refugees who come to our shores seeking help, but how so many of them come to be refugees in the first place. This is appropriate because many people have become refugees as a result of wars in which we have participated, such as the invasion of Iraq in 2003.

Prime Minister Malcolm Turnbull says that on matters of national security, we and the United States are “joined at the hip”.

On Friday the news broke that H R McMaster, a distinguished US Army General, would be leaving his post as Donald Trump’s National Security Adviser and would be replaced by John Bolton. John Bolton is one of the most extreme neocons from the George W Bush era, a man who has no time for the United Nations and denies the existence of international law, saying if it has any meaning at all it is to constrict the United States.

Immediately following this news, conservative columnist George Will described Bolton as “the second most dangerous American”, and in my twitter stream this morning I read Sir Lawrence Freedman, Emeritus Professor of War Studies at Kings College London, saying that if at the end of Bolton’s tenure North Korea and Iran are in the same position as they are now, Bolton will consider his time as National Security Adviser to have been a failure.

Bolton is a man who is unapologetic about the invasion of Iraq and its aftermath, and who has a profound faith in the efficacy of armed force as a way of solving problems.

So I ask you to reflect upon the fact that the power to send the ADF off to war is effectively in the hands of the Prime Minister alone, and the Prime Minister says we and the United States are “joined at the hip.” Is that what we want?

Our organisation, Australians for War Powers Reform, has for some years been campaigning for the so-called war powers to be transferred to Federal Parliament, so that never again can the young men and women of the ADF be sent to war without a resolution in favour being passed by both Houses of Parliament.

There are some who argue that this would involve a risk of the government of the day being stymied by the minority parties in the Senate. My response to that is that the minority parties in the Senate only become relevant when the Government cannot persuade the Opposition that there is a compelling case for military action. The two occasions on which that would have been the case in living memory are Vietnam and Iraq 2003, which is not a bad track record for our proposal.

That objection sounds to me more like a worry that the government of the day might be hampered in embarking on wars of choice.

I urge you, ladies and gentlemen, to support our campaign.

Join us as a member here… or enter your email address here to subscribe to our free Bulletin.

Funding request to our supporters

Why are Australian forces still in Iraq?