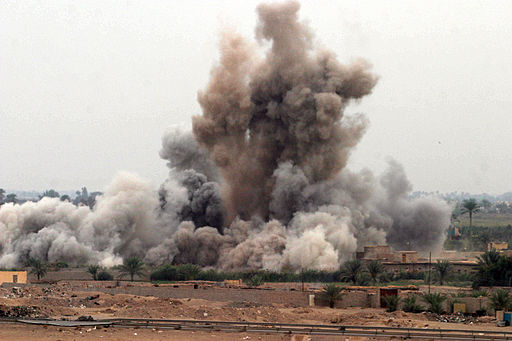 RAAF Super Hornet aircrew on return to Australia from the Middle East last January Image from The AustralianImage: US Marine Corps via Wikimedia Commons

Australians for War Powers Reform, which has campaigned for an inquiry into how Australia went to war in Iraq, renews its call on the Government to explain how sending the RAAF to join bombing raids in Syria can do other than add to the exodus of Syrians, Iraqis, Afghans and others from their countries. The group continues to question the legality of such military action by Australia, and asserts that before it takes place several steps are mandatory:

AWPR Acting President and former diplomat Dr Alison Broinowski said, “The Prime Minister has not explained why, when other countries refrain from illegally bombing Syria, it is justifiable for Australia to do so. He has not told the Australian people or the Parliament what would represent success, how that would be achieved, or at what cost. He appears to expect Australia to make an open-ended commitment to another potentially disastrous military adventure.”

On 24 March this year, PM Abbott revealed that the RAAF was already assisting US combat operations over Syria. On 8 September, he is expected to secure the agreement of the National Security Committee of Cabinet to accept a formal US invitation – reportedly secured at Australia’s behest – to have RAAF itself undertake bombing in Syria. Dr Broinowski said, “If the Prime Minister used the current sitting of Parliament to explain why Australia is widening this war, to have it debated and voted upon, responsibility for it would be shared with all MPs and the people’s House would function as it should in a democracy.”

Hans Blix: from Iraq to a new Cold War