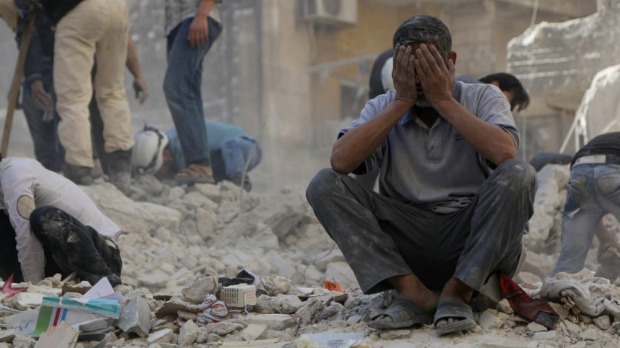 What are we to make of the conflict at the heart of the Middle East at this stage and Australia’s continued participation in it? Is it the ‘Great Game’ being played out yet again, this time on a different level essentially with proxies? Or will the proxies give way to more direct action by what even by today’s standards we consider Great Powers, even if relative?

What is clear from an aerial view is that there are a host of minor conflicts on a new battle ground with the larger regional countries moving in to fill vacuums where they see them. From the West’s viewpoint is it essential to restore the artificial state system created in the earlier colonial era or are ineluctable forces intent upon redefining boundaries and influence? This might seem a lot of questions but as yet we do not have answers.

The situation which opened up these questions had several well known causes: the US invasion of Iraq in 2003 which destroyed essential state structures; the failure of what was left of its state structure to be inclusive of the Sunni tribes and ran instead for the Shias (and their spiritual cousins in Iran); the Arab Spring that awakened deep discontent with a reviled regime in Syria; the attempt on the part of Turkey to yet again curb Kurdish territorial/national ambitions; and no doubt some ill-considered US dabbling with anti-Assad forces it deemed “moderate”.

Out of this, especially in Iraq and Syria, emerged ISIS and related elements whose ambition is to restore their notion of a caliphate which in effect would destroy any semblance of the interstate system in that region as it has existed.

Should this concern the Great Powers? Earlier conflicts over trade routes, access to resources (lately oil), and navigational routes vulnerable to disruption remain as concerns but not to the extent previously, as evidenced by US ambivalence lately. The risks arising from these conflicts are manifesting themselves more in the homelands of the Great Powers. While having tragic consequences they are not, or not yet, existential. Russia is the nation most at risk because of its need for maritime access through the Dardanelles to the Black Sea,and from there to the Syrian coast and the Mediterranean. Turkey is directly involved in that but not necessarily constructively as we have seen from the recent downing of the Russian air-force plane.

Every one would like to get rid of ISIS. Some US generals and some local armchair observers have asserted that with stepped up bombing and some tens of thousands of highly trained troops on the ground this could be done, if the previous mistakes in Iraq and elsewhere were avoided. But given past experience and the violent undercurrents of ethnic and religious resentments, and vicious tribal ambitions, this would be pure nonsense.

Certainly the national parliaments of Britain, France and Germany have all had a say in their responses to date but as with the responses to the original 2003 Iraq invasion national parliaments are not always endowed with the necessary wisdom to choose an effective path. But who is? Are we analysing the issues deeply enough? Are we allowing sufficiently for how those most directly affected in that region see their critical interests? And if those interests are ignored or overlooked what are the consequences for the rest of us?

There may be pressure in Western countries to do more; even to repeat the mistakes of the past. What we can observe to date is that the current Australian government appears to have moderated its thinking on these matters and would seem unlikely to be led into hammering the same old nail or similar. But if they were to do so, we should hope that the government would at least follow constitutional processes and put whatever might be proposed to a Parliamentary debate and vote.

Australia should be supporting forthcoming diplomatic efforts to create safe havens for affected civilians, both for their protection and to reduce the compulsion to flee from their homelands. Australia could have a constructive role here but its credentials remain tenuous while it continues with the bombing and maintains such a harsh approach to people fleeing persecution. Meanwhile however we appear to have been excluded from this process anyway.