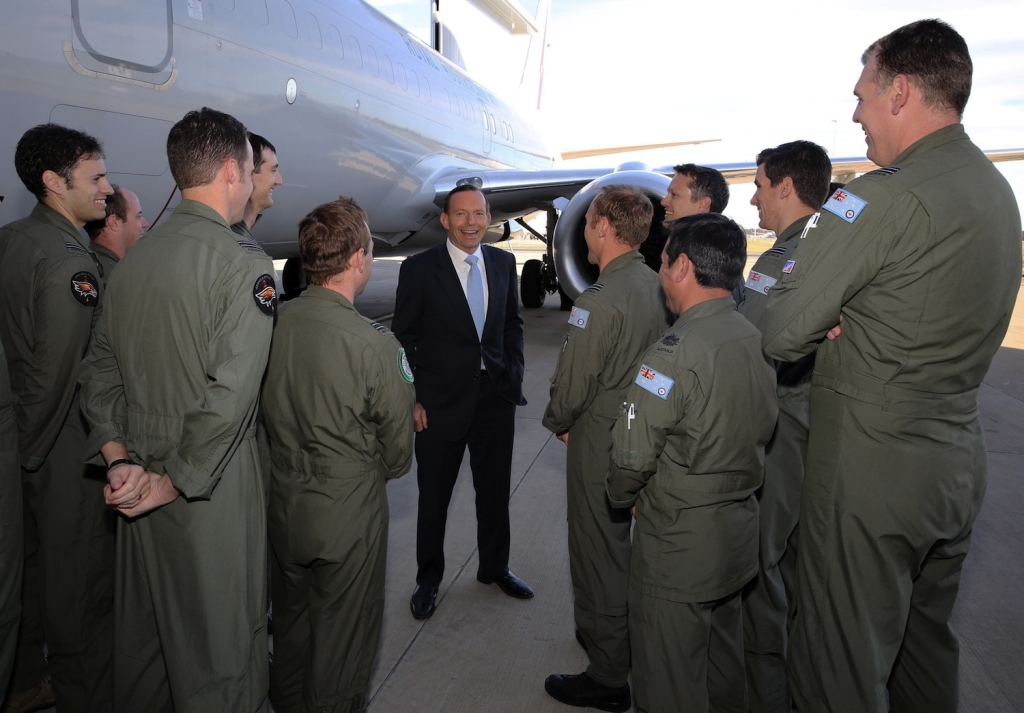 Australia’s decision to join the United States bombing campaign in Syria was mired in deceit, disinformation and obfuscation from the outset.  When the Australian government announced in August 2015 that they were going to consider the legal ramifications involved before committing to a decision, they omitted two crucial facts.

The first fact was that the then Prime Minister Tony Abbott had already solicited an invitation from the Americans to join the bombing campaign.  The second omitted fact was that the legal opinion had been sought and obtained a year earlier.

In mid-September 2015, without any parliamentary debate (then or since) Australia committed itself to yet another war on behalf of the Americans.  Bombing raids (“sorties”) commenced almost immediately.

In September 2015, according to the Defence Department’s own website, there were 18 sorties into Syria.  In the following months the sorties flown were as follows:

No explanation has ever been forthcoming to explain this pattern of initial activity, then nothing for two months, and then a militarily insignificant contribution for the following three months.

When asked on ABC National Radio about the legal basis for Australia’s bombing of another country’s sovereign territory, Foreign Minister Julie Bishop relied upon Article 51 of the UN Charter and an alleged invitation from the Iraqi government.

That Article 51 manifestly does not apply, and that the Iraqi government denied issuing any such invitation (which would have been illegal anyway) seemed to have entirely escaped the attention of the Australian mainstream media. (1)

Equally missing from the mainstream media’s purview was the significance of the Russian military intervention at the end of September at the invitation of the Syrian government.  That government is the lawful and internationally recognised government of Syria.  The Australian media persist however, in referring to it as the “Assad regime.”

Again, there was the wildly inaccurate and misinformed interpretation of Russian motives.  There has been a similar myopia displayed in the mainstream’s reaction to the Russian government’s announcement last week that it was undertaking a partial withdrawal of its military forces in Syria.

As Stephen Cohen points out, if you want to know what the Russians are doing and why, take the time to read the statements of President Putin.  That would save the commentariat from repeated surprises. (2)  At the outset, Mr Putin said that the objective was to bolster the Syrian army so that it could fight effectively and prevent terrorist groups from taking Damascus.  Secondly, he said that by defeating the terrorists that would help to bring about peace negotiations.

The Russian announcement of withdrawal because those objectives had been substantially achieved took the western politicians and pundits by surprise.  They were surprised because they are largely victims of their own propaganda that invariably portrays Russian actions as having some darker purpose.

Even more than the constant self-serving demonization of Mr Putin and Russia is the western media’s inability to put the Syrian conflict in its proper geopolitical context.  The western media and its pundits are equally captive to their own blinkered view of the region and its history.

Robert F. Kennedy Jnr has superbly set out that history in an important article  (3) published in February 2016 that the Australian mainstream media have completely ignored.

Kennedy points out that CIA meddling in Syria began in 1949 and has continued unabated since then.  Its Syrian activities are part of an observable Middle East pattern that has included coups and attempted coups in Iran, Syria, Jordan, Iraq and Egypt.

The current campaign of destabilization against Syria began in 2000 when Qatar, which hosts two major US military bases as well as the headquarters for US Central Command, proposed a major new pipeline.

That pipeline was planned to run for 1500km from Qatar, through Saudi Arabia, Jordan, Syria and Turkey, from where the gas would be shipped by sea to the European market.

There are only three feasible sources of natural gas for Europe: Qatar, Iran and Russia.  Iran had been under US inspired sanctions since the overthrow of the puppet regime of the Shah in 1979.  The Shah had himself been installed following a British and United States coup against the democratic Mossadegh government in 1953.

It has long been a geopolitical aim of the US to destroy Russia’s capacity to meet European demand for gas.  That Russian gas has been piped through Ukraine.  Part of the wider plan therefore was to overthrow the government of Ukraine, which was achieved in February 2014.  The further demonization of Russia was achieved through the shooting down of MH17 over Eastern Ukraine in July 2014.

Again the Australian mainstream media have shown no interest in determining the facts of that event.  Instead there is the mindless repetition of anti-Russian propaganda and the all too familiar pattern of withholding relevant information. (4)

The Qatari pipeline was therefore part of a wider policy to undermine the Russian economy, which Mr Putin had rescued from western interests after the looting of Russian assets that took place during the disastrous Yeltsin years.

The Syrian government had friendly relations with Russia and both governments saw the proposed Qatari pipeline scheme for what it was.  Syria therefore refused to allow its territory to be used for transit purposes.  That was when the Assad government’s problems really began.

It is well documented now that the favoured technique for disrupting and overthrowing uncooperative governments is the use of proxy forces.  The technique had been developed and refined with the Mujihideen forces trained in Pakistan for infiltration and sabotage in Afghanistan, the “Stans” of the then Soviet Union around the Caspian Basin (the world’s second largest oil and gas reserves) and the Muslim region of Xinjiang in south western China.

In the Syrian case, Turkey, Saudi Arabia and the US were training, arming and financing radical Islamic terrorist groups from at least 2011 to foment unrest and sow terror among the Syrian people.

The western media persist in describing it as a “civil” war, although that is a singularly inapt description in the Syrian context.  Such a description had to be maintained however, to sustain the illusion that there was a  “moderate” opposition to the Assad government.  This alleged moderate opposition was to step in once the desired regime change, “Assad must go” as parroted by Foreign Minister Julie Bishop), had been effected.

The major terrorist group at present is ISIS, itself a direct creation of the US and its allies, notably Israel, as Iraq’s Deputy Prime Minister Bahaa al-Araji among others has pointed out. (6) That allegation, and the evidence in support, has yet to appear in the Australian mainstream media.

Even when the Russians, through satellite and aerial photography, showed the two-way supply chains between ISIS occupied territory and Turkey, our Foreign Minister was not moved to comment.   Similarly, when Israel admitted treating wounded ISIS fighters in its military hospital in the occupied Golan Heights the Australian government extended Israel, yet again, the courtesy of looking the other way and refraining from critical comment.

It is not a coincidence that the bulk of the territory currently occupied by ISIS in Syria and Iraq follows the route of the proposed Qatari pipeline.

When the prominent American writer Seymour Hersh published an article (7) in the London Review of Books in 2014 pointing out that Australian front companies in Libya were being used to funnel weapons and ammunition from Libya via Turkey to the Syrian terrorists, there is again a curious silence from Canberra.

An FOI request to DFAT for information about the Australian government response to Hersh’s article elicited the response that FOI was there to provide documentation, not information! (8)

That non-response was consistent with numerous examples of the attitude of successive governments to Australia’s involvement in foreign wars.  The policy appears to be: say the minimum, lie if necessary; never explain or justify; under no circumstances hold a parliamentary debate; nor an inquiry when things go wrong.

As much as possible, the issues must be kept out of the public arena, relying as they can on the complicity of a supine media, content to act as nothing more than a propaganda organ.  The Opposition consistently fails in its most basic functions; to responsibly represent the real interests of the people and the nation, and to call the government to account.

With the agreement on the cessation of hostilities, the partial withdrawal of Russian troops from Syria, and the resumption of the Geneva peace talks there was a golden opportunity for Australia to recalibrate its policy.

As noted above, Australia’s military contribution is simultaneously illegal and irrelevant.  Australia was excluded from participation from participation in the Geneva peace talks on the unsurprising grounds that it had no independent contribution to make.  Unlike the Russians, who rightly fear an extension of Islamic terrorism within its own national borders, Australia has no strategic interest in the Middle East.

This reality is despite the strenuous efforts of various favoured commentators to argue bizarre and ignorant propositions about Russian “aggression.” (9)

The opportunity to recalibrate its foreign policy again seems to have passed.  Australia has learned nothing from multiple failed foreign policy forays, invariably at the behest of the Americans, in Vietnam, Afghanistan, Iraq and Syria.  It now looks willing and eager to be part of the US policy of confrontation and “containment” of China.  That may be the ultimately fatal blunder of a foreign policy establishment unable to discern and act upon Australia’s true national interests. (10)

James O’Neill is a Barrister at Law.  He may be contacted at joneill@qldbar.asn.au

1.     A more detailed analysis of the illegal basis of Australia’s involvement in the Syrian war is found in two articles by the present author in New Matilda in November and December 2015.

One thought on “What exactly is Australia’s policy in Syria?”