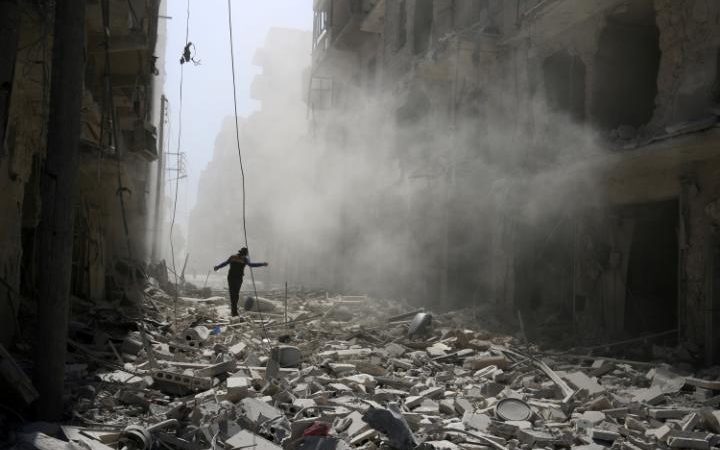 The Americans claimed it was a “mistake.”  Judging by the behaviour of the American ambassador to the UN, Samantha Power, any contrition on their part could best be described as imperfect.

It is highly unlikely that the attack was an error.  Syrian troops had been in their positions for several months, a fact well known to the Americans through drone surveillance and signals intelligence.

What is particularly curious in this case however is the apparent willingness of the US’s coalition partners to accept some share of the blame for the alleged mistake.  Notably, the United Kingdom, Australia and Denmark all admitted culpability.  The first two nations are certainly culpable in a general sense for the carnage and devastation being wrought in Iraq and Syria, but whether that extends to this particular disaster is a moot point.

The Australian Ministry of Defence issued a statement in which they said that “Australian aircraft were among a number of international aircraft taking part in this Coalition operation around Deir-ez-Zor.”  They said that there would be a “review” by the “US-led Coalition” and to maintain the review’s integrity “will not provide any further details at this time.”

When and if those details emerge they should prove interesting, although the most likely outcome is further obfuscation, both as to what actually happened, and more importantly in the Syrian context what Australia was doing in the first place.

According to a Russian military report, which has not been denied, two F-16 fighters and two A-10 ground attack aircraft carried out the attacks.  Between them they carried out four strikes on the Syrian Army positions.

What is significant about this information, which the Australian media failed to notice, was that neither the UK nor Australia have either of these aircraft types operating in either Iraq or Syria.  Indeed, Australia does not possess either type of aircraft in its repertoire.

The Danes do have F-16 aircraft and as noted, they did admit to taking part.  We therefore have four countries admitting involvement in an attack that involved four aeroplanes and make four strikes when two of the countries do not even have those planes.

The admissions of culpability in these circumstances seem neither militarily plausible nor remotely likely to be true.

Even the involvement of the Danes seems unlikely.  Although they do have F-16 fighters, the Danish Prime Minister, when announcing their deployment to the Middle East, specifically said “Danish fighter jets would not join US planes in bombing Syria.”

Furthermore, according to the Syrian military command, the planes were tracked from Erbil in the Kurdish part of northern Iraq.  The Americans are the only nation to use the Erbil facility for fighter planes.  All of which makes the supposed confessions all the more suspect.

Although the Australian media have not bothered to tell their readers and listeners, Australian involvement in the Syrian war by the RAAF has had its own oddities.

There was an initial flurry of activity in September 2015 after then Prime Minister announced that Australia would be joining yet another American led war.  Eighteen sorties were flown in a two week period that month.  At the end of September the Russians announced they were commencing military operations in Syria.  Unlike Australia, the Russian operations were at the request of the Syrian government and therefore in compliance with international law.

It may have been a coincidence, but following the Russian intervention, the RAAF flew no sorties in either October or November 2015.  There were 10 in December,  6 in January 2016 and 4 in February 2016.  There was then a complete hiatus from March to July 2016 inclusive, with four sorties in August.

What the Australian media are also careful to avoid is the fact that any military action in Syria by Australian military forces is in breach of international law.  The claim by Foreign Minister Julie Bishop in November 2015 that our military involvement was pursuant to the collective self-defence provisions of Article 51 of the UN charter was legal nonsense.  Apart from New Matilda, none of the Australian media exposed the nonsense for what it was.

Rather than the professed “mistake,” what happened at Deir-ez-Zor is entirely consistent with the long-standing American aim of regime change in Syria.  That regime change is desired not only as part of Israel’s Yinon Plan, but part of the wider geo-political ambition to undermine Europe’s use of Russian gas and replace it with American controlled and Qatari sourced gas. (1)

Since the Russian intervention in September 2015 the various Coalition backed terrorist groups have suffered significant reverses.  Their actions exposed the pretend nature of the American “war on terror”.  The current ceasefire, now irrevocably broken, is, like the previous ceasefires, no more than an opportunity for the terrorist groups to re-arm and consolidate their positions.

It was not a coincidence that the American attack on Deir-ez-Zor was immediately followed by ISIS groups mounting an attack on Syrian Army positions, thereby compromising the latter’s ability to defend both the airfield and the large civilian population it was protecting.

The Australian government has provided a willing chorus to the regime change demands of the Americans.  This latest incident, pleading guilty to an activity they almost certainly did not commit, is best seen as another example of doing and saying anything to please the Americans.

Do not look to the alleged “inquiry” to reveal anything of significance, or the mainstream media to break their long-standing habits and actually discuss and analyze what is really going on in the Middle East.  That would be too much like treating us to the adult conversation our deeply disappointing Prime Minister promised us when he replaced Abbott the same month this latest sorry involvement in Syria began.

Barrister at Law.  He may be contacted at joneill@qldbar.asn.au

This article was originally published in Independent Australia.

A man walks on the rubble of damaged buildings after an airstrike on the rebel held al-Qaterji neighbourhood of Aleppo, Syria September 25, 2016. CREDIT: REUTERS/ABDALRHMAN ISMAIL