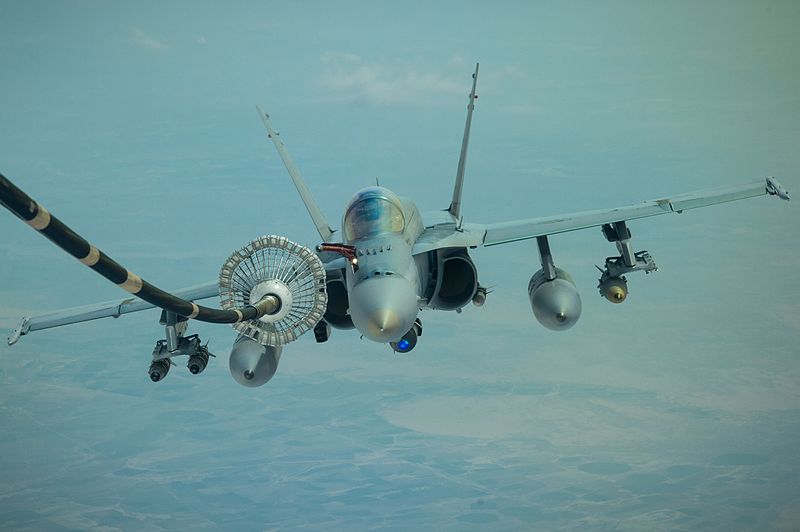 An RAAF FA-18 refuelling over Iraq in March 2017. Image courtesy of US Air Force via Wikimedia Commons

As Prime Minister Malcolm Turnbull has made it clear that he will be no less aggressive than his predecessor Tony Abbott. “Our job is to protect Australia from all threats,” Mr Turnbull has said. “Right now, as you know, our Air Force is operating in the Middle East killing terrorists.” Back in September 2016 Mr Turnbull announced that Australian laws would be overhauled to allow the Australian Defence Force to target more Islamic State (IS) fighters in Iraq and Syria. The destruction of much of Mosul and Raqqa has followed, with the PM bragging that “our Australian Defence Force” is now “able to kill terrorists in the Middle East whether they have a gun in their hand, a bomb in their hand, whether they are in the back office planning an attack or raising money or engaged in logistics.”

Looser restrictions presumably meant that Australian pilots had more limited discretion to ‘red card’ an operation if they came to the view that completion of the mission would endanger civilians. This restriction accords with the Geneva Conventions, and the ADF has often claimed credit for it, implying that the US is less scrupulous. See RAAF mission against ISIS: Pilots did not drop bombs because of collateral damage risk (News.com.au).

With an apparent shift in the balance between “completing the mission” and avoiding civilian casualties, it was going to be only a matter of time before the RAAF, by playing fewer red cards, had civilian deaths to account for: seven in Mosul on 30 March 2017 and at least one in the same city on 7 June. The civilian victims included two children, one for each attack. See ADF’s bombing raids could have killed two children in Iraq (ABC) and RAAF airstrike may have killed Iraqi child (SBS)

As usual, an investigation was announced, and RAAF bombings appear to have been temporarily suspended. For Australia, these ‘mistakes’ were almost unprecedented: for the US, they are common. American military estimates claim 735 civilian deaths in the Middle East war since 2014, with another 350 incidents still being investigated. But an unofficial group Airwars counts 5,000 civilian deaths at the hands of the coalition in Iraq and Syria.

An earlier ‘mistake’ involving Australia was in Syria in September 2016 when a bombing raid killed 62 Syrian soldiers who had been in conflict with IS fighters. It is not clear whether Australians took part in the attack or were only involved in refuelling and logistics, but Defence issued an apology and a suspension of bombing raids. In an effort to be as transparent as its coalition allies about what the RAAF is doing in Iraq and Syria, where it has six fighter jets, a surveillance aircraft and a refuelling plane, the ADF announced fortnightly updates on its website. To May 2017, the RAAF had flown 224 missions, it said.

Another mistake, another report: but this time, no longer boasting about Australia killing terrorists, Malcolm Turnbull went to the AFL grand final, leaving it to the Chief of Operations in the Middle East, Vice-Admiral David Johnston, to announce the results of the investigation, without any reported apology. Apart from football, the differences between Australians and Americans appear to be shrinking.