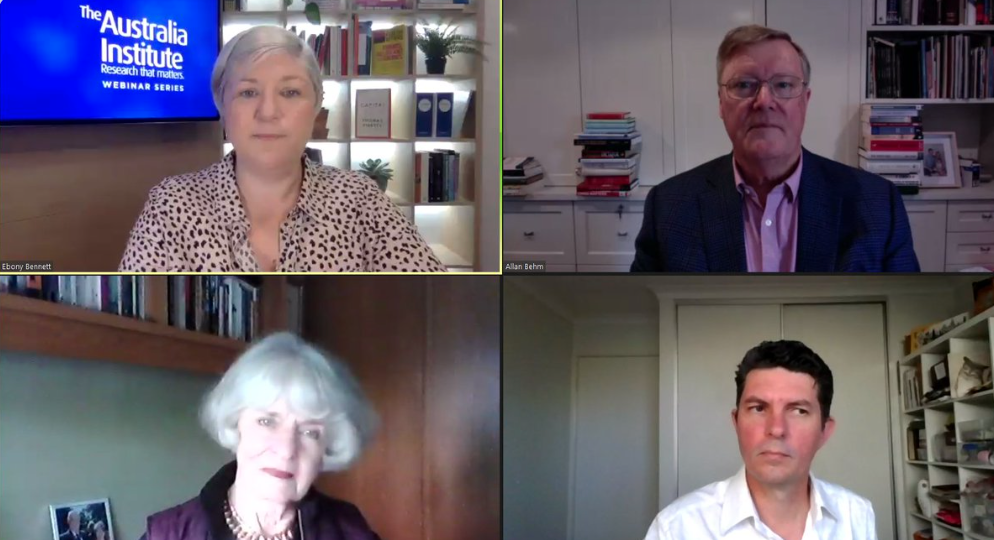 High profile think tank the  Australia Institute took on the War Powers debate this month with a live online discussion featuring a panel of experts including Dr Alison Broinowski, The Vice President of Australians for War Powers Reform.

The hour long discussion, which was streamed via zoom to several hundred viewers tackled the current lack of transparency around how Australia goes to war and why past conflicts have largely avoided any proper scrutiny, even in hindsight.

“It’s a dramatically unsatisfactory state of affairs,” he said, which sets aside all the usual Parliamentary checks and balances, and forces MPs and Senators to scramble for explanations – what is the purpose of this engagement, how much will it costs, how long will it last etc.

The lack of process locks the Australian public out and provides no meaningful consultation on this life and death decision, according to Dr Broinowski.

“(The public’s) concerns are not listened to. Why? Because governments make damn sure that in the Parliament there is no such opportunity.” she said.

“In 2015 when Tony Abbott recommitted troops to Iraq and then to Syria…at no point were the Australian people consulted through the Parliament,” she added.

The chair of the panel was Allan Behm, Director of the International & Security Affairs program at the Australia Institute.

He pointed to flaws in the internal process of the major political parties and the way in which promotion and advancement works for back benchers.

“Newly arrived back benchers are all very keen that there should be appropriate accountability…until their seniors remind them, if they’re ambitious for a seat in the executive, then they ought to be very careful about having their rights and privileges and prerogatives subject to any external (parliamentary) review,” he said.

The recent Brereton report into alleged war crimes by Australian soldiers has prompted widespread discussion about accountability and how the claims should be handled.

While prosecutions of several members of the armed forces look likely, Scott Ludlam said we should also be looking much further up the chain of command.

“It was terrifying to see how rapidly that was firewalled in the media and buried as rapidly as possible…so we are just going to end up blaming a couple of wayward soldiers and kind of, narrow the case for responsibility as much as we can”.

In the case of the invasion of Iraq he goes much further.

“Australia’s leadership in 2002 committed what most international legal scholars agree was a war crime. John Howard…is almost certainly a war criminal,” he said.

And he believes the same goes for other leaders who backed the war including UK PM Tony Blair and US President George W. Bush.

In the UK a wide ranging and public inquiry was held into the Iraq deployment and after six years, delivered a series of scathing findings, highly critical of the former Prime Minister Tony Blair.

But here in Australia, despite significant pressure, no inquiry has been held into Australia’s involvement in that disastrous war.

The webinar canvassed several related issues including Australian overseas arms sales, the romanticised portrayal of the ANZUS treaty, the Labor party’s stated plan on war powers, and Australian public opinion on military accountability and transparency. More than 80 per cent of Australian respondents to a recent poll expressed support for changing the way we go to war.

The webinar was moderated by Ebony Bennett, the Deputy Director of the Australia Institute.

You can view the entire discussion from March 24, 2021 on YouTube.

The silence is deafening