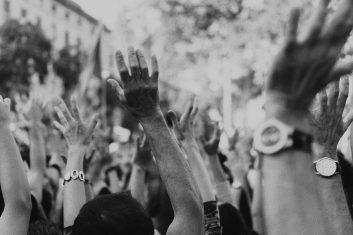 In the Australian Financial Review on 26th May 2016, under the heading: “Shadow of long-forgotten Iraq falls over campaign”, the celebrated columnist, Laura Tingle, wrote that we seem to be “very busy observing an election campaign that day-to-day seems to be about nothing very much at all”. She noted that Australia remains one of few countries to not reflect on its involvement in Iraq.

Next month (July) the Report of Sir John Chilcot on the UK’s involvement in the 2003 Iraq war will be released. Nothing like that is afoot here, or ever will be on present indications. Nor indeed as to our on-going involvement in that region. All this in spite of a widespread consensus that the 2003 invasion itself was illegal both as a matter of international law and Australian domestic law. An invasion that has led directly and indirectly to millions of deaths and trillions of dollars of needless expenditure.

The power to authorise armed deployments overseas is a Prerogative power derived in law from the Crown. This was ignored by the Howard Government in 2003 when it bypassed not just the Parliament but more importantly in this context the Governor-General who technically, with the Executive Council, is the embodiment of the Prerogative. It is the latter process that is designed to ensure that all relevant considerations have been addressed and attended to. However the government relied then, as it does now, solely on Section 8 of the Defence Act, which is an Act for the administration of the defence forces in Australia. That Act does not embody the essential Prerogative power. Hence those engaging in armed combat abroad, and those who sent them, would not be covered by a lawful authorisation and could by their actions be guilty of war crimes before the International Criminal Court or for offences under Australian law.

Furthermore, Australian forces currently in Iraq are not backed by a Status of Forces Agreement without which they could, should they have issues, criminal or civil, with the  local authorities, be subject to Iraqi law. To overcome this some have been issued with diplomatic passports which brings to mind the saying that war is diplomacy by other means.

Laura Tingle is quite right. The case for our current involvement in Iraq, if there is one, has not been explained either by the government or the Opposition, as much because for them it is a distraction. Yet we are now engaged there in a civil war which then-Prime Minister Abbott described originally as a contest between goodies and baddies, it is essentially a battle among the major regional tribes, derived from history and religion, for control of their respective regions.

Tragic though the circumstances in Iraq and Syria may be, Australia needs to focus its attention and resources on its own region where tensions are growing and which may soon present more complex and more relevant questions for our defence forces and for national security. Before the election, we should be having an informed and considered debate on that.

Iraq war, what was it good for? Absolutely nothing

The importance of monitoring civilian losses

Should Australia be doing arms deals with Saudi Arabia?