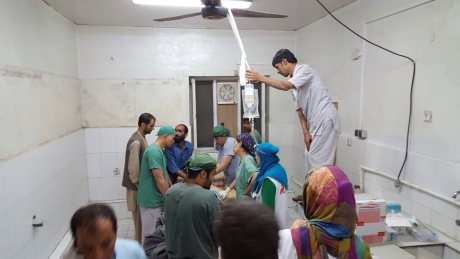 All of Médecins Sans Frontières remains deeply shocked and saddened after the MSF trauma hospital in Kunduz, Afghanistan was struck by a series of aerial bombing raids around 3am on Saturday 3 October 2015, as part of the battle of the Afghan government and US forces to regain control of the city previously taken by the Taliban.

The hospital was full at the time of the attack and 10 patients, including 3 children and 12 MSF staff members were killed, 37 people were injured including 19 MSF staff members. The MSF team in Kunduz was operating the only hospital capable of carrying out war trauma surgery in a region devastated by violent combat. Today the population has no other facility capable of providing this kind of life-saving care, constituting a second catastrophe in terms of access to healthcare for thousands of people.

This tragedy occurred despite all parties to the conflict being fully and regularly informed of the GPS coordinates of all our medical facility locations. MSF takes great care to ensure all its medical facilities are in no way militarised, as it is only through ensuring fully independent and impartial action to assist those in times of conflict that we can call for the neutrality of our medical facilities to be respected by all.

We will never find words adequate to express our shock, sympathy and solidarity with all who have been so tragically impacted by this horrific, avoidable event referred to by the military as ‘collateral damage’ and as ‘a consequence of war’. Once more it shows the absence of basic, elementary respect provided to civilians and medical workers caught in conflict and to the Geneva Conventions legislated to protect medical workers in conflict zones. Kunduz hospital was fulfilling a rare role in this region, providing care to all.

The Australian Defence Force is part of the US Coalition in a number of wars. In Afghanistan 41 ADF personnel have been killed, 261 Australians wounded, many others adversely affected by the Afghanistan deployments. We as the Australian body politic send predominantly young Australians into danger, putting their lives and their long term mental health in harms way on the turn of potentially a single person’s decision and worldview, our laws allowing a prime minister of the day to send Australians to war.

Increasingly our nation stands ever more isolated amongst democracies in perpetuating this executive power. There are many dreadful unintended consequences of war and in MSF’s case we must continually weigh up and try to hold in balance the overwhelming medical needs of a population against the risk to courageous MSF staff working in war zones and our duty of care to them.

I refer you to the Médecins Sans Frontières International President Dr Joanne Liu’s statement and her call for an independent investigation into the Kunduz hospital attack. Please support her call and send the sign to your networks. Afghanistan: Enough. Even war has rules.

Finally, this on ABC News 24, by Andrew Quilty photographer from Sydney. Horrendous.

Image: surgery in the aftermath of the attack, MSF.