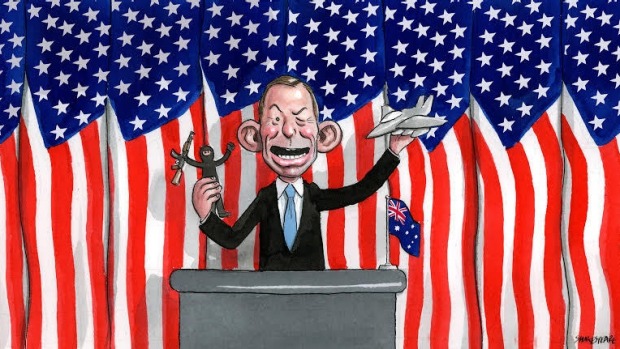 This is not the first time our leaders have claimed to be invited by another government (Vietnam) or an ally (US) to get into a war or to widen one. As we now know, before the wars in Afghanistan and Iraq, Australian prime ministers surreptitiously offered and even urged the US to accept our troops before being asked. It was a captain’s pick, every time.

If these wars were legal, why did our prime ministers not explain that in Parliament from the outset, producing a Security Council resolution or a direct request from a government? The same now applies to bombing Syria, for which Mr Abbott procured a ‘formal invitation’ from the US, which does not make such attacks legal. But if not legal, they are moral, the Prime Minister claims, and Bob Carr supports that, citing the Responsibility to Protect, which enjoins the international community to intervene where governments endanger their citizens.

But bombing Syria will endanger more Syrians than it protects, and Australian military authorities agree that our contribution will make no difference, so that makes it the opposite of moral. Jim Molan, who led the onslaught at Fallujah, candidly admits Australia’s real motive, as always, is to stiffen the Americans’ resolve. But why we need to fight IS in Syria or anywhere else, and what we hope to gain from it, he does not say. Australia will not break the pattern of duplicitous justifications for war until we use the proper parliamentary processes. Only then will successive captains be held responsible for their illegal and immoral picks.