As we know from the Iraq and Afghanistan wars, many ADF personnel have been embedded in US military forces, serving alongside US military personnel, often in war zones. The most recent example concerns the insertion of the RAN guided missile frigate HMAS Sydney into the United States Navy’s Seventh Fleet, home ported in Yokosuka, Japan. The Sydney will become part of the protective screen for the core of the fleet the Nimitz-class aircraft carrier USS George Washington (CVN-73), and operate as a part of the Washington’s Carrier Strike Group. 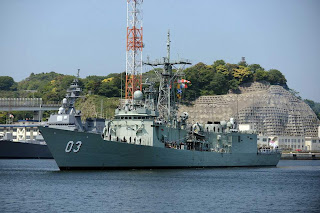 The question arises of the legal status of the Sydney as part of the Carrier Strike Force in the event that it is drawn into maritime conflict with North Korean forces in the Japan Sea or the Yellow Sea.

The Sydney will be taking part in the Carrier Strike Group’s normal activities in the region, including multinational naval exercises and port visits in Japan and South Korea. For the Navy “this is a premium opportunity to gain an intimate working knowledge of how warships interact in a Carrier Strike Group to achieve a vast array of different and dynamic missions, while still achieving the primary aim of protecting a high value asset such as a carrier”.

There’s nothing remarkable about this deployment as such, except for the quite real possibility that the carrier strike force, and the Sydney along with it, will be required to take part in a deterrent show of force in response to North Korean provocations. This was exactly what the Washington carrier group did in late July 2010, after the sinking of the ROK navy ship Cheonan.

For this blog, the deployment of the Sydney as an embedded part of the US Navy’s sole carrier strike force in the Pacific raises important issues of Australian government accountability in the event of armed conflict. The issues are not straightforward, but could include:

Tension in the region has died down a little, following the completion of joint US-ROK naval exercises last month, and consequent DPRK agitation and provocation. Buit nothing is guaranteed in that part of the world, and as the 2010 sinking of the Cheonan and the artillery shelling of Yeongpyeong Island by the DPRK show, not much short of anything can easily happen.
Moreover, the dark historical memory that is never far away in these tit-for-tat incidents happening out of public sight at sea is the Gulf of Tonkin Incident, when an alleged attack by North Vietnamese torpedo boats on a US Navy destroyer in August 1964 provided the Johnson administration with the political momentum to persuade both houses of Congress to pass a joint resolution authorising the president to use US forces to defend any member of SEATO that requested assistance – opening the way to the massive US escalation of the Vietnam War in 1965-66. Here the key fact is that it was many years, and many lives lost, before it was conclusively demonstrated the sup[posed North Vietnamese attacks simply did not take place.

Warship to join US fleet in hot zone: Japan base for frigate, Brendan Nicholson, The Australian (26 April 2013)

Are we again on the brink of further “Mission Creep” in Iraq?

Reply to the Minister for Defence