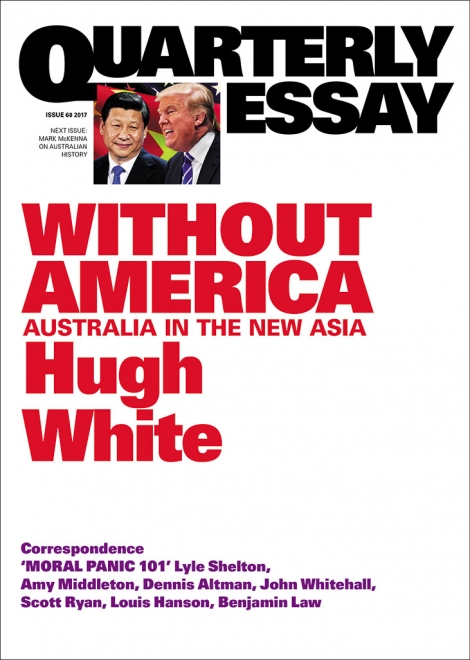 For years Hugh White has contributed knowledgeably to Australia’s defence and foreign policies, while deploring the prevailing feebleness of our public debate about them. With almost no public debate, Australia has for sixteen years been spending $95 million per day on fighting unnecessary wars in distant countries. Having had no independent inquiry into them, it remains a mystery how Australia can avoid similarly counterproductive wars in the future.

Professor White continues to credit the United States with maintaining peace and stability in Asia for more than fifty years. This might surprise those who survived America’s wars in Korea, Vietnam, Laos, and Cambodia, or who now live in such US-occupied spaces as Okinawa, Guam, Micronesia, and Palau. In recent decades, Asian countries themselves have avoided going to war over their disagreements, and the Southeast Asians’ abstention from great power rivalries and distant conflicts has been particularly impressive. The result of the United States backing away from wars it cannot win might be a pax Asiatica, a welcome outcome for Australia. Instead, White recommends that Australia fill the gap left by the US by spending even more on defence, including possibly on nuclear weapons. He does not explain how Australia on its own could possibly achieve militarily what the US cannot, or how any amount of military equipment could make Australia impregnable.

‘Without America’ is essential reading, in part because it poses these important and urgent questions for Australia. Concise and analytical, it was written in advance of the Foreign Affairs White Paper of 23 November 2017 and President Trump’s National Security Strategy of 18 December 2017. White correctly anticipated that Canberra and Washington would perpetuate the ‘agreeable illusion’ that America can continue to impose its will in Asia. Predictably, even though the White Paper concedes that China is challenging US dominance in East Asia, and that China’s GDP will double America’s by 2030, it fails to acknowledge the consequence: that America cannot resist China’s challenge, let alone defeat it, by going to war again in Asia in its own interests or in those of its allies.

White’s logic leads to the prospect that the US will withdraw from the region, just as Britain did. National interests will displace appeals to history and values. Australia will have to learn to deal with a powerful and demanding China which, he says, ‘is not an ally and with which we have little in common.’ Australia, White recommends, should urgently to make up for decades of mindless dependence, get over what Alan Gyngell calls our ‘fear of abandonment,’ and learn how to protect our interests in an Asia without America.

A worse prospect which White doesn’t allow for is that the US, still the world’s predominant military force, will not go as quietly as his rationale assumes. The American military hate to give up their bases, and the military-industrial-security complex seeks every opportunity to promote its technologies. Australia, as always, will urge America to retain its Asia-Pacific presence. Japan, South Korea, and possibly India may do the same. The result could be chaotic and catastrophic.

China’s recent reminder to America and Australia about international undertakings to refrain from the threat or use of force was a sign of things to come, and Beijing was quite right: the US regards itself as above such conventions, and Australia incessantly recommends to others the ‘international rules-based order’ which we breach when it suits us. America uses military force far more than any other country, often with Australia’s support, contravening or ignoring international law. We should now, Cavan Hogue recommends, get used to China doing what the US has always done. China is keeping its trade, infrastructure projects, and most of what White calls ‘military gamesmanship’ within the international rules, and they are working. Whether we like it or not, he predicts, Australia is going to have a more independent foreign policy in the new Asia. Which makes the decade of philosophical guidance we were promised in the Foreign Affairs White paper out of date within its first year.